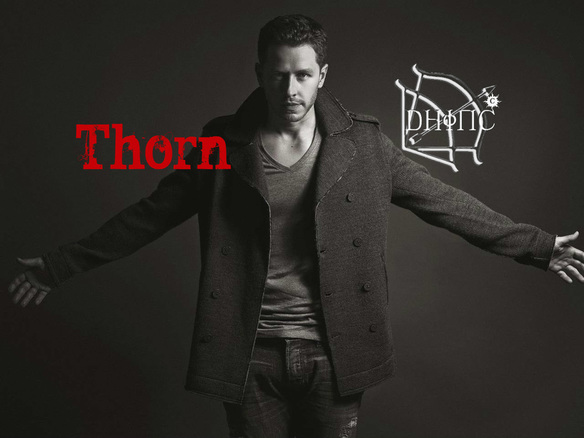 Fullname: Akantheus Leucious Fonus
Nickname: Thorn
Main Series: Hellchaser™
Designation: None of your business. Labels don't define me. I do.
Job: Kiss the ring, baby. I'm Head Honcho.
DOB: None of your business
Height: 6' 2
Hair Color: Dark blond
Eye Color: Depends on his mood. But usually a light glowing green.
Build: Muscular
Parents: Define parent
Significant Other: Karma... if she doesn't kill me first
Children: Daisy
Best Friend: Thorn... sometimes Karma
Worst Enemy: Noir
Tattoos/ Scars: We don't talk about that.
Favorite Pastime: Disappointing my sperm donor.
Mode of Transportation: Bugatti Veyron
Weapon of Choice: You'll find out when I kill you.
Pets: Misery
Other Facts:
Friends are only enemies who haven't turned yet.
I don't argue. I kill. I don't play. I kill. I don't compromise... I think you've learned the pattern by now.
Family is hell. Trust me, I know.
​I am Cade's Brother


I would say I like to crochet, but that implies a soft side which I lack grotesquely. The best thing to say is that I’m the biggest disappointment my father has ever known- which is really good for you humans.

The… entity had great plans for me. Too bad. I’m no one’s bitch. I don’t come on command and I don’t fetch. What I do is kick the culo loco of anyone who gets near me showing anything other than utmost respect and fear.

The good news is, I’ve stood strong for a long time. The bad news…

I don’t know how much longer I can hold out. May the gods help all of you then.


I tried the whole relationship thing when I found out my fuck buddy of a decade was pregnant with my child. I did I wanted to make amends for things that happened in my past. It was my chance to do things correctly how they should of been. Something happened and the only way to save both Karma and the children was to leave... Now I'm back.. You know what they say about a woman scorn. Downside for her I'm not leaving her and the kids unprotected downside for me she could geld me and probably not regret it.