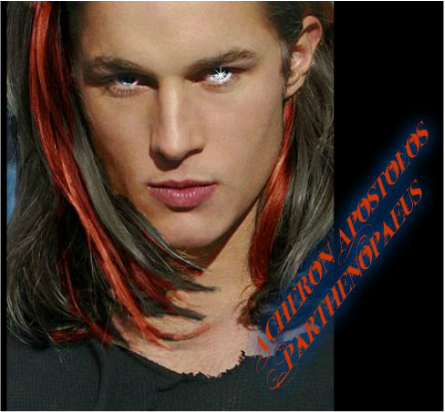 
Even though he was the youngest when he died, Acheron was the first Dark-Hunter ever appointed. He is also the writer of the Dark-Hunter Creed and of the Code we abide by.

Because of his Dark-Hunter age and the fact that he fought the Daimons alone for thousands of years, he is more phantom than real. He interacts with the other Dark-Hunters on a whim, and his sage advice is often sought.

Eccentric and idiosyncratic to the extreme, he is a legend among legends. The Dark-Hunters never know what to expect when Acheron enters a scene. He runs the full gamut from friendly to intimidating to downright scary.

It is said of him that there has never been a mortal born who could equal his physical perfection. He possesses a raw, rare kind of charisma.

To look at him is to want him. To see him is to ache to touch him.

Artemis herself once said of him:

Like a lethal wild animal, he moved with a primal promise of danger and masculine power. With the promise of supreme sexual fulfillment.

Sunshine describes him as:

He had such a deadly, graceful swagger. A predator’s lope. There was something intrinsically sexual about Acheron. Something compelling, seductive. Just being near him made her want to reach out and touch him.

It was as if he were putting off some powerful pheromones and at the same time, she was scared of him. He was like a lethal, beautiful animal in the wild that part of you wanted to cuddle while the other part of you knew he was just as likely to rip your arm off as he want to cuddle back.

No one knows why he became what he did. Then again, no one knows much about him. Period. And he likes it that way. Trying to get any personal information out if him is an impossible task.

No one even knows what his real hair color is.