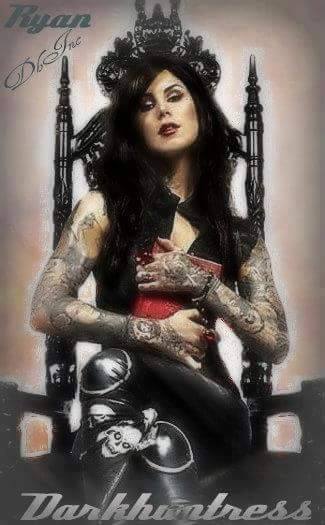 Full Name-Ryan
Nicknames-Ry,Ry-ry,
Designation: Dark Huntress
Height: 6'4,
Hair: black,
Eye Color: black (green when she was human),
Significant other-Brantley ,
Best Friend - her squire Liz until the squire was relocated,
Tattoos-all over,
Mode of transportation -Lambo\flashing
Favorite Pastime-picking on Liz,
Weapon of choice-hatchet and katana along with her pyrokinesis and telekinesis,
Other facts- Brutally raped and killed by her father ,cousin,and best friend for being bisexual Ryan became darkhuntress killing daimons at night.she is afraid to trust anyone due to her past

Raped and brutally tortured by her father after he found out she was bisexual Ryan thought she might have found hope in cousin and best friend to help but that wasnt the case they came to finish the job. Ryan swore vengeance as they smashed her head into the wall killing her...her screams ran through to Artemis making the woman a darkhuntress and let her take her vengeance. Needless to say she doesnt trust anyone....