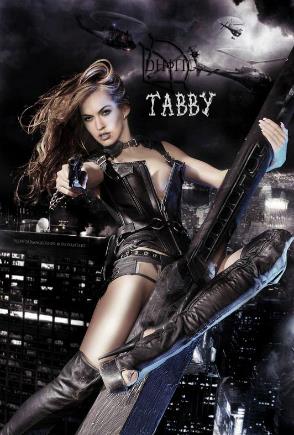 The twin sister of Amanda, Tabby is something else. The only question is what? She walks to her own beat and takes nothing from anyone. She is the baddest thing that stalks the night.

Named after the daughter onBewitched ,Tabitha is the eighth of the Devereaux sisters and twin to Amanda—identical except for the scar running down her cheek, a memento left by the Daimon Desiderius. She has a master's degree in Ancient Civilizations. A self-proclaimed vampire slayer, Tabitha has a bizarre fondness for a "strength potion" that consists of curdled milk, Tabasco sauce, egg yolks, and tea leaves. She owns Pandora's Box, an adult shop on
Bourbon Street. Tabitha is the wife of the Dark-Hunter Valerius Magnus (not to be confused with the Valerius who
tortured and killed Kyrian. That was Valerius's grandfather. I really can't stress this enough). She was
made immortal by Acheron, so that she might walk beside her equally immortal sister Amanda for all
eternity.

Her navel is pierced. She wears a silver toe ring on her right foot.