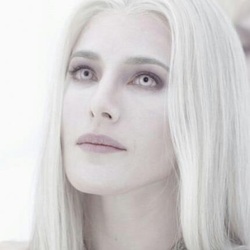 The Moirae are the three sisters who decide human fate. Lachesis sings of the things that were, Clotho those that are, and Atropos (or Atropus) the things that are to be. Of the three, Atropos is the smallest in stature, but the most terrible and feared.
The smallest and oldest, Atropos (Atty) is the most feared and the meanest. She’s the one who determines when someone dies… even the gods. Clotho (Cloie) the the spinner of our lives. She’s the one who decides how they unfold as they unfold. Lachesis (Lacy) then measures the life. Known as the Apportioner, she will hold the thread of life out to Atty who then snips is when she’s ready for it to end.
There is a hot debate on who is more powerful. The Fates or Zeus. It’s been argued that he tells them when to end a life and they merely serve his whims.
But since we know someone else is Final Fate...

Clotho (Greek: Κλωθώ) is the youngest of the Three Fates or Moirai, in ancient Greek mythology. Her Roman equivalent is Nona. Clotho was responsible for spinning the thread of human life. She also made major decisions, such as when a person was born, thus in effect controlling people's lives. This power enabled her not only to choose who was born, but also to decide when gods or mortals were to be saved or put to death. For example, when Pelops was killed and boiled by his father, it was Clotho who brought him back to life.

As one of the three fates her contribution to mythology was immense. Clotho, along with her sisters and Hermes, was given credit for creating the alphabet for their people. Even though Clotho and her sister were real goddesses, their representation of fate is more focused upon in Greek mythology. Thread represented human life and her decisions represented the fate of all men in society.

Clotho was the daughter of Zeus and Themis, and sister to Lachesis and Atropos, according to Greek mythology. Clotho is also mentioned in the tenth book of the Republic of Plato as the daughter of Necessity. In Roman mythology it was believed that she was daughter of Uranus and Gaia. She and her sisters were collectively called the Three Fates.

As one of the Three Fates, Clotho assisted Hermes in creating the alphabet, forced the goddess Aphrodite into making love with other gods, killed the Titan Typhon with poison fruit, persuaded Zeus to kill Asclepius with a bolt of lightning, and aided the gods in their war with the Giants by killing Agrius and Thoas with bronze clubs. Clotho also used her life-giving powers in the myth of Tantalus, the god who had slain and prepared his son Pelops for a dinner party with other gods. When the other gods had found out what Tantalus had done, they put the remaining pieces of Pelops in a cauldron. Clotho brought him back to life, with the exemption of his eaten shoulder, which was replaced by a chunk of ivory. Tantalus was then thrust into Hades for what he had done to his own kin. Clotho was worshiped in many places in Greece as one of the Three Fates and is sometimes associated with the Keres and Erinyes, which are other deity groups in Greek mythology. Ariadne, the Greek goddess of fertility, is similar to Clotho in that she carries a ball of thread, much like Clotho’s spindle.

Clotho, along with the other two Fates, was tricked by becoming intoxicated by Alcestis. Alcestis, who had two children with Admetus, became deeply anguished when Admetus became very sick and eventually died. Alcestis took advantage of Clotho's drunkenness and tried to get her husband back. The Three Fates explained that if they were to find a replacement for Admetus then he could be released from the Underworld. A substitute was not found so Alcestis offered herself up to be the replacement in order to bring her husband back to life. As the agreement had been met, Alcestis quickly began to grow sick and sank into her grave as Admetus came back to life. There was no turning back now that the process had started. At the last instant, Hercules arrived at the home of Admetus in the midst of the predicament. When Death came to take Alcestis away, Hercules wrestled him and forced him to return Alcestis, allowing Admetus and Alecetis to be reunited.